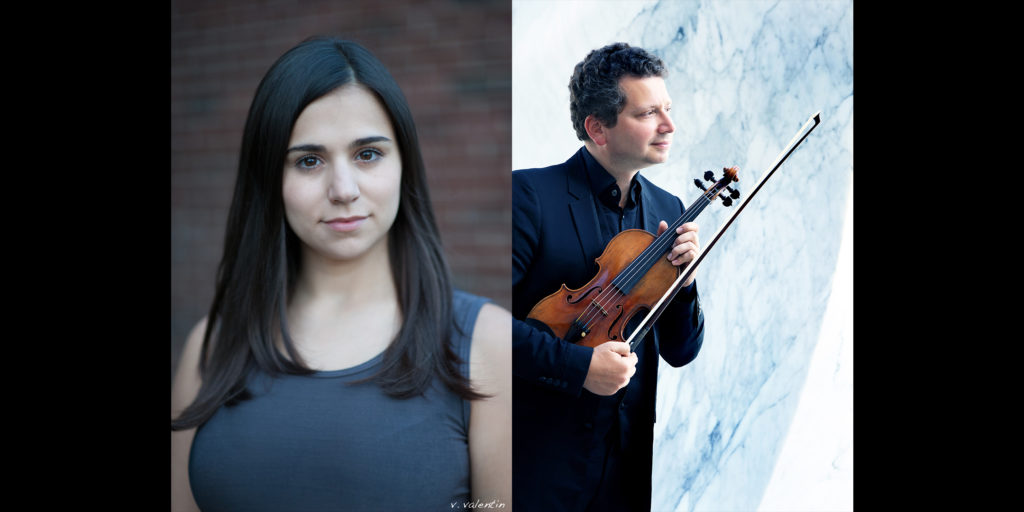 MUSIC – AND MORE! – IN THE GALLERY, sponsored by Meyers & Flowers

BUY TICKETS ONLINE. SAVE $5 PER TICKET WHEN YOU BUY IN ADVANCE! (Tickets purchased on the day of the event will be $25 each.)

Advanced piano students of Janna Williamson will provide a prelude recital to this exciting concert.

Born in St Petersburg in 1975, Dmitri Makhtin started his musical education at the age of four with his parents, both professional violinists, and joined the Music School for gifted children in 1981. In 1989, he won the first prize at the Russian violonists competition. In 1990, he obtained a scholarship from the Young Musicians Foundation and of the Idyllwild Arts Academy (California), and then studied with P. Hirshhorn and H. Krebbers. He is also the laureate of international competitions such as the Kloster Schontal, Niccolò Paganini, Louis Spohr, Tibor Varga, Montréal, Sibelius and Praetoria Competitions.

Dmitri Makhtin made his debut in 1997 in Paris with the State Academic Symphony Orchestra of the Russian Federation, under the baton of Yevgeny Svetlanov, and in 1998 in the United States with the Cleveland Orchestra, conducted by Leonard Slatkin.

Since then, he has performed with the philharmonic orchestras of Ural, Monte-Carlo, Marseille, Hong-Kong, City of Prague, Radio France and Saint Petersburg; with the symphonic orchestras of Swedish Radio, Euskadi, Singapore and Dallas; as well as the Orchestre National de Montpellier, Orchestre National de Lille or The European Soloists of Luxembourg. He performed with conductors such as Leonard Slatkin, James DePreist, Sakari Oramo, Alexander Dmitriyev, Jiří Bělohlávek, Jerzy Semkow, Yuri Temirkanov, Jean-Claude Casadesus, Alexander Vedernikov, Yevgeny Svetlanov, Alexander Sladkovsky, Robert Trevino and Paolo Arrivabeni and others.

Winner of the 2019 Sicily International Piano Competition, concert pianist Julia Siciliano has been heralded as a musician with “fabulous creative power” by the Bonn General-Anzeiger. Julia has become a well-respected and anticipated rising talent on the world stage. A winner of many local and international piano competitions, Julia has won top prizes at the Heida Hermanns International Competition, Iowa Piano Competition, MTNA National  Competition, and Beethoven Sonata Competition. Active as a chamber musician, Julia has been invited to perform with the Cincinnati Symphony Orchestra Chamber Players, Basque National Orchestra’s chamber music series “Miramon Matinées”, and has given numerous recitals with Metropolitan Opera stars Amanda Pabyan, Eric Owens, and Marina Domashenko.

Julia’s debut solo album “Dream Catchers”, a two disc album featuring small scale works by Beethoven, Schumann, Schubert, Ravel and Debussy, was released in 2016 to great acclaim. Fanfare Magazine declared “this release has merit as a career milestone” and leaves “no doubt about the devotion and seriousness of Siciliano’s approach to music.” Gramophone Magazine praised her “fine technique and natural musicality” pinpointing her “masterful delicacy, harmonic motion, and timing” in Debussy’s Images II.