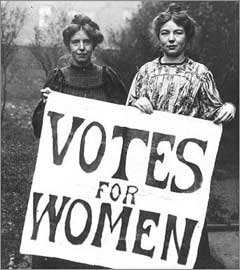 MUSIC – AND MORE! – IN THE GALLERY, sponsored by Meyers & Flowers

BUY TICKETS ONLINE. SAVE $5 PER TICKET WHEN YOU BUY IN ADVANCE! (Tickets purchased on the day of the event will be $15 each.)

Folk singer Phil Passen celebrates the 100th anniversary of women’s suffrage with songs and stories of the time.

2020 marks 100 years since ratification by the states of the 19th amendment, forbidding states to deny the right to vote on the basis of sex.

This program consists of songs about women’s suffrage from as early as the mid-nineteenth century through 1920. In addition, the program will include songs from the nineteenth and twentieth centuries about the role of women in society, including songs about equal work for equal pay; reproductive rights; and other relevant topics. It begins with “Winning the Vote,” a humorous but pointed song written in 1912 as a conversation between men and women about women’s suffrage, and ends with “Bread and Roses,” the anthemic song of women workers inspired by the 1912 Lawrence textile strike. This is an entertaining and informative look at the fight for women’s right to vote and the continuing fight for women’s rights.

When Phil Passen and his wife, writer Barbara Gregorich, settled in the Chicago area in the early seventies, they joined the Old Town School of Folk Music, and Phil began to itch to play an instrument. He really wanted to play the drums, but the set he had in mind didn’t fit into a nine hundred square foot apartment.

Although Phil heard the hammered dulcimer for the first time on John McCutcheon recordings in the late seventies, he didn’t immediately make the connection between hammering strings and hammering drum heads.

Finally, at a John McCutcheon concert at the Old Town School in 1994, the light dawned. Inspired anew as John played the dulcimer, Phil thought: “I can do that.” After just one lesson with teacher Dona Benkert, Phil was hooked. Promises, Promises, published in the summer 1995 issue of Dulcimer Players News, tells the story of Phil’s early (and continuing) dedication to the dulcimer.

In 1996 Phil left his work in the graphic arts industry to devote his time to the dulcimer.

Few musicians play the hammered dulcimer. Fewer still sing while accompanying themselves on this fascinating instrument, whose name means “beautiful song.” Phil Passen does both.

Phil plays and sings traditional American and Celtic music. Can such upbeat dance music be called soothing? With rhythmic playing on fast tunes and sensitive playing on slow numbers, Phil’s music often elicits that word — “soothing.” And though it may seem contradictory, listeners also dub the music “happy” and “bouncy” as they tap their feet to the beat.